When Julie Bestry suggested I join Twitter back in 2008, I was immediately captivated, but since then I’ve had an on-again off-again relationship with the site. Lately I’ve been feeling a little blah about it, but the ideas suggested by Naomi Binford in this article have rekindled my enthusiasm.

Twitter is a great platform for your social media campaign. It is short, sweet, and simple. Unfortunately, it is also short term.

With 320 million users, and 100 million of that actively tweeting every day, your tweet has a short shelf life. It can be buried under all the other tweets on your followers’ accounts faster than you can say “social media campaign.”

You have to up your game in the creativity department to get your Twitter updates noticed. Here we have listed 6 creative strategies for your Twitter campaign.

Get creative with your tweets to attract attention and generate engagement with your followers. Click to Tweet

Stories always work, but with a 140-letter character limit, you do need to use some ingenuity in pulling it off.

Impossible, you might say. Well not really, as shown in the really clever parlays for @VeryShortStory. Here’s a good one:

Quit my job as a fortune teller. Started as a scam, but I actually saw my future. Scary stuff I didn't want to know. Trying to forget.

This is in the tradition of Stephen King, but funny. Such updates elicit a laugh at once, and thinking after. At any rate, it snags a reader’s attention.

You don’t have to make up a story every time, though. You can retweet the ones you enjoyed for your followers. You can also tell your story in a series of tweets, just make sure you finish the story!

Games ensure active participation, especially if all they have to do is click.

You can also post math problems, cryptic codes, or word scrambles, and your followers can try solving them. Jonah Peretti’s Choose Your Adventure used Bit.ly links to lead his followers through the game.

Edugeeksclub editor Lynn Fields laughs at her own attempt. “I enjoyed the Choose Your Own Adventure series when I was a kid, so I tried it out. I cut the blue wire and died.” Using Bit.ly kept the choices short enough to work within Twitter’s limits. You can use the Bit.ly API key to keep track of link clicks via Tweetdeck or similar, and create your own short domain.

There are lots of interesting people and posts out there, and you can do everyone a favor by sharing them on your Twitter account. You will expand your network, create new connections, and bring yourself to the attention of influencers if you choose what you share well.

State briefly why you shared the post and use the Bit.ly app to post the link. Make it easy on yourself by using Twitterfeed to update your Twitter posts from other social media accounts automatically whenever one appears. You can use the customization features to make these auto tweets your own.

Statistics show that people engage more with photos than they do with text. Photos can convey a lot more than a written description (does anyone else sense an unspoken cliché here?), which is why using photos is an excellent way to promote your business on Twitter.

However, you need to post something that isn’t just a photo of your product or service. You need to make it an experience for users, or else they’ll just gloss over it as part of the scenery. Show your product assembled or in use. If you are selling a service, show behind the scenes images or share a nice photo sent by a grateful client. It doesn’t have to be a professional photo as long as it conveys a clear and positive message.

You can add value to your photo by appealing to emotions and the human side of your users. Check out this post by Coke.

This may be a bit off the mark, but stage dressing is important if you want to give users a good first impression. Twitter lets you customize your profile page, so use it to generate interest and provide the business information to anyone who visits your profile page. What’s the use of a kickass post if it doesn’t generate any business, right? Here are instructions on how to do it for your Twitter page.

People love to answer questions, as long as it is to questions to which they can easily respond. They don’t even have to be particularly interested in the subject to do so if you make it easy enough.

One campaign by Starbucks asked  the public to choose one of two frothy and cold designer coffee preparations as their favorite. While some people would never choose that type of beverage on their own, they would still choose one to oblige. It doesn’t cost them anything.

Most people find it flattering when someone asks their opinion. You can also pose a statement ending in a blank, inviting users to complete it. Construct your question in such a way that it doesn’t cost the user anything to respond, and see your engagement spike.

Social media adds a whole new dimension to marketing businesses, and many entrepreneurs use one or more platforms regularly. You can make the most use of your resources by ensuring your posts get the attention you want. These tips for making creative Twitter updates are easy to follow and implement. Stop wasting time and start tweeting! 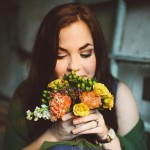 Naomi Binford is a writer from New York City. She loves gathering tidbits of information on random subjects that fascinate her and sharing those with her readers online. You can connect with her via Twitter @NaomiBinford.

Naomi Binford is a writer from New York City. She loves gathering tidbits of information on random subjects that fascinate her and sharing those with her readers online. You can connect with her via Twitter @NaomiBinford.